The last time that India lost a World Cup match to Australia, back in the finals in 2003, I was a school kid who was so heartbroken, I vowed to hate Man of the Match Ricky Ponting forever. I cursed our captain Sourav Ganguly for fielding first, strike bowler Zaheer Khan for leaking runs and all the extras, Sachin Tendulkar for top-edging to McGrath on 4, and everyone in the team for letting us down. But 12 years later, when India lost yet another World Cup match to Australia, this time in a semifinal, I am mature enough to understand that these cricketers tried their best and did not lose on purpose. 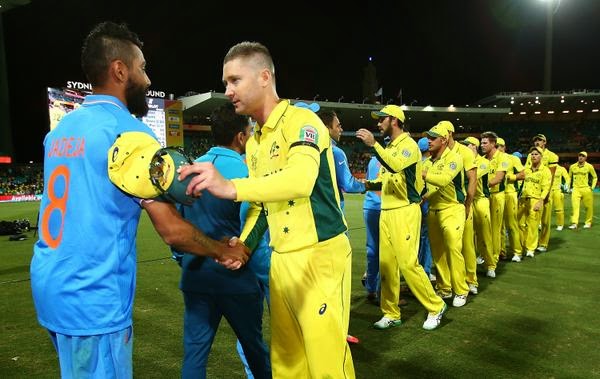 Yes, the boys could have played better. That Shikhar Dhawan shot could have been avoided, bowling could have been tighter at death, and Virat Kolhi could have played himself in before going for the big hits. But we cannot blindly blame the team for losing a match, implying that they did hard enough, not after being away from home for 4 months in preparation. And we most definitely can’t blame Anushka Sharma for ‘distracting’ her better half just by being in the stadium. That’s both sexist and insulting to Kohli, who has consistently been India’s top performer for years. Yet, numerous fans through the digital platform belittled the team and their relations, forgetting all the good work done in the past. To make matters worse, reputed media outlets labeled the defeat as a ‘shame’ and questioned player commitment. Such reactions betray that these supposed followers of the game do not know how sport works.  Usually, one side wins, while the other loses but everyone tries equally hard. People who say that they watch sport should understand this better than anyone else. In fact, they should be a sport about it. 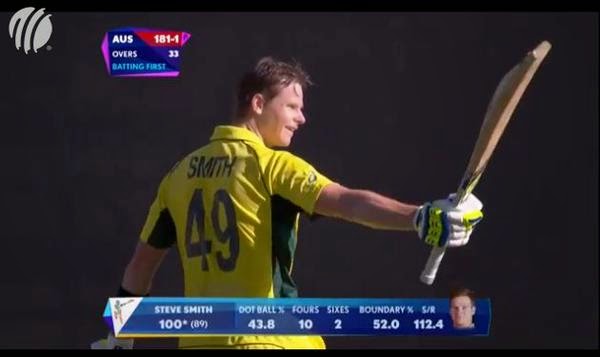 Let’s accept that Steve Smith played a great innings and deserved his century, let’s give them the credit due because Australia is the better bowling unit and let’s face it that the better team won. But at the same time, let’s not forget that India made it to the semifinals when few gave us a chance, after losing every game in Australia for the last three months. Nobody, not even the most ardent supporter, believed that we could beat South Africa, let alone bowl them out for less than 200! Let’s celebrate the fact that in seven matches before this our young, inexperienced bowling unit took all the 70 wickets. Lets remember the centuries of Suresh Raina, despite his weakness against the short ball, or that of Virat Kohli that helped us maintain our perfect score against Pakistan, or those of Dhawan and Rohit Sharma pulling us out of tough situations. Most importantly, let’s acknowledge the contribution of captain MS Dhoni. The guy who carried us home last World Cup and was leading from the front till the penultimate moment in this one. He did not see his newborn daughter for over a month, choosing to stay in Australia with the team to prepare for the World Cup. But we saw the emotion on his face after the match, and we should know how much it mattered. 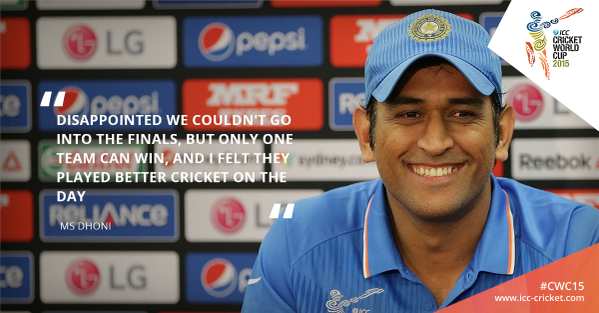 In 2003, I felt let down by the team, but in 2015 I feel is pride for the efforts of our team. Because in the last decade I’ve grown up enough to understand that in sport, the team that performs better on that day wins. I sincerely wish that ‘fans’ who make whatsapp jokes and ‘media’ that says Shamed in Sydney also grow up and understand this.

The Defending Champions may have not have lived up to their tagline of We Won’t Give it Back, but we certainly didn’t give it away easy. 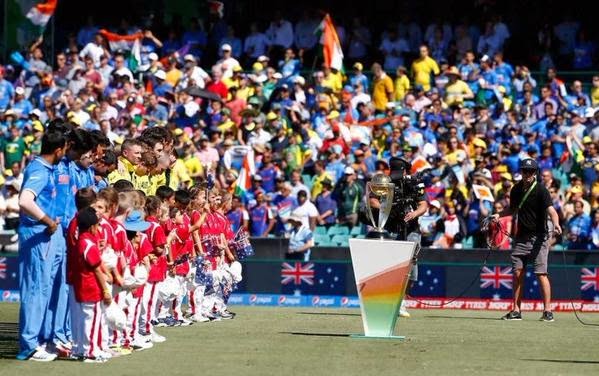