THE YEAR THAT WAS: Where do we go from here, Federer?

THE YEAR THAT WAS: Where do we go from here, Federer? 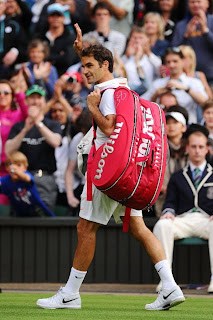 The journey from July 2012 to July 2013, more specifically from Wimbledon 2012 to Wimbledon 2013, has been an especially unusual, unimaginable and an insane one to say the least, for Roger Federer. In one sentence, it has been a journey from Ecstasy to Agony. A year back, he was on top of the world with a record-equalling seventh Wimbledon Trophy, the record-breaking ATP World No. 1 Ranking and a shot at the record-shattering 300 weeks as No. 1. A year later, it would only be fair to say that the situation is down in the dumps, with an unprecedented second-round defeat, slipping down to World No. 5 for the first time in eons and an unceremonious end to a 10-year Grand Slam streak. Topsy-turvy is an understatement for the year that was.

The questions begs itself; how on God’s good, green, grassed earth did we get here? How did All England Tennis Championship’s greatest protégé, Centre Court’s precious ward, SW 19 grass court’s invincible warrior clad in pristine white reach a situation like this? Wimbledon is his first Grand Slam title, a Trophy he has lifted seven times, five of those back-to-back, and a tournament where he has failed to make the finals only twice before. Since his first taste of success in 2003, Federer’s relationship with the grass courts at SW 19 has been nothing short of a love affair with exactly Three plot twists – 2008, 2010 (Both Nadal) and 2011 (Djokovic). 2012 was a fairytale, where Federer recaptured all his lost and former glory vanquishing all his foes with a performance worthy of the All England Lawn Tennis and Croquet Club’ crown prince. Then what happened in 2013? How did the Defending Champion lose and (adding insult to injury) in the second round to a relatively unknown player? And how did he not recover from it but fell further backward losing to a qualifier, Federico Delbonis in the semis of his next outing, Hamburg?

In hindsight, the beginning of the end probably began on the same day he won his seventh Wimbledon crown. Ever since that fateful day, Federer has never been the same again. He won merely two trophies after that, only one of which has come in six months of 2013.

The same question again? How did we come here in just under a year? From the soaring heights of a Grand Slam victory to a depths of defeat in an ATP 500 event? The only possible explanation I see, and I say this with a heart as heavy as Thor’s hammer, is that that maybe, finally, we have come to a point where he simply isn’t the best tennis player on the tour at present.  Greatest of all Times? Yes, surely. Greatest in 2013? Not quite.

The biggest reason for this is the most natural of all – age. Federer is days away from 32 years of age. (August 8th is his birthday) Rafael Nadal is 27, Novak Djokovic is 26 as is Andy Murray, Tomas Berdych and Richard Gasquet are both 27, Jo-Wilfred Tsonga and Stanislas Wawrinka are both 28 and Juan Martin Del Potro is only 24. Of the current Top 10, David Ferrer is the only player above 30 years of age. (Of these, only Nadal, Djokovic, Murray and Del Potro have won a Grand Slam)

The sport of tennis has evolved tremendously in the past few years, it is not just textbook technique & grace that can get you through, speed, power & stamina are more crucial than ever now. The recent Wimbledon finals bearing testimony to the fact, where two pairs of 26-year old legs were tired by the time the marathon 4+ hours finals were done. It is akin to the backhand shot – the classic one-handed backhand becomes a rarity as the more potent two-handed backhand gains importance. Similarly gone are the times where Federer’s adroitness was the deciding factor in matches, it is agility & athleticism that is foremost to the craft today, something that a 31-year old would difficult to adapt to at this stage of his career.

That being said, it would be most unwise to write Federer off. This is the man who turned the tide in tennis in the 2000s by the sheer force of the number of his achievements, taking over every milestone there was, to be considered greater than McEnroe, Sampras, Laver, Emerson, Agassi. This is the man who has spend 300 weeks as the World No. 1 with 17 Grand Slams and 77 ATP Titles, an Olympic Gold & Silver, but most importantly an unmatched passion & precision for tennis.

So where do we go from here? While Roger Federer goes to play the Crédit Agricole Suisse Open, Gstaad, we Federer fans have already skipped ahead to the US Open. In the hope & faith that we will be redeemed in the finals Grand Slam of the year. Personally, I’d be gladly vindicated if Roger Federer bounces back from the terrible year that was to win another title (Note, I didn’t say, even though I wish, a Slam)  even if it is for one last time, and prove to the world, once again, that he is indeed the GOAT. I do not have enough optimism to sustain my fangirlism, but I have hope. Hope that Roger Federer will once again redefine renaissance and his resurgence will inspire the Federer family once again. We cannot know what the future holds, except the fact that Roger Federer is NOT planning to hang up his boots just as yet. As long as he plays, I will watch him & witness the poetic beauty of tennis, irrespective of victory or defeat. . It is hard being a Federer fan in 2013, but then, nothing easy is worth it!
Posted by ZENIA at 03:42 No comments: