IT'S ALWAYS THRILLING IN MUMBAI!

Choice of game
There is no reason not to go for an India vs England Test, even more so when the match is at Wankhede, a ground where India vs England has an unforgettable history. Who can forget the match back in 2006 where Shaun Udal became unlikely hero and India folded for 100 all-out. And this match has been just as topsy-turvy as the one 6 years back where

Key Performer
KP (Kevin Pietersen) has always been the KP (Key Performer) for England and this was no different as he played one of the best innings by an Englishman on Indian soil. His fluent 186 off 233 with 20 fours and 4 sixes, two of which were absolute crackers, was the highlight of the day. It did not matter if you were English or Indian, all spectators alike applauded the sheer magnificence of his bat whenever he scored a boundary. His century celebrations were trademark KP & there were very few people in the stands who did not join in the cheer. Interesting observation – far more people stood up for Pietersen than for other centurion Alastair Cook!

One thing you’d have changed about the day
Instead of changing one thing about today’s play, I’d change eight! The seven Indian wickets that fell like dominoes and the absolute insipid bowling earlier in the day.  As an irrational, emotional India fan, it was heart-breaking to watch the team crumble like this in home conditions. And as each of the 7 wickets fell in just about 30 overs, the last shreds of optimism evaporated. As an objective cricket watcher, it was exhilarating to see 15 wickets fall one after the other in one day.

The interplay you enjoyed the most
One hit the other all over the park for seemingly easy runs, the other got him out in an anti-climax dismissal after a brilliant innings. For obvious reasons, the contest I enjoyed the most was Kevin Pietersen vs Pragyan Ojha. KP’s susceptibility against left-arm spinners has given rise to much talk but he made little of it as he hoisted Ojha for 3 sixes and the same got better off him when , on the verge of a double hundred, he offered a thin edge into Dhoni’s gloves to end a splendid innings. I’d say that in this interplay, both Ojha and Petersen returned with equal honors.

Wow moment
The WOW Moment for me, strangely, wasn’t on the ground as such, but in the stands. The sheer energy and enthusiasm of the crowds is infectious – The cheering, the chanting, the chatting. The insane celebrations when an English wicket fell, the rhythmic clapping when the bowlers ran in to bowl, the wild slogan shouting when an Indian batsmen took guard, the roaring applause even for  singles, the standing ovation when Sachin Tendulkar entered the ground – this was the wow factor for me.

Player Watch
Alastair Cook. From starting the day with a solid century to ending the day on field, shining the ball & pepping his team up, captain Cook could do no wrong today. It was a treat to watch him bat as he brought up his second century of this series and lead from the front. His fielding was spirited and some sharp saves just served to increase the intensity of the other fielders. He must have gone off field a happy man with India on the mat.

Shot of the day
The Sachin Tendulkar Straight Drive. He scored only 8 runs off 2 boundaries but with his exquisite timing and clean hitting, his first four off Panesar is my shot of the day. Pietersen and Cook scored in hordes but the typical shot down the ground by the Master stands out above everything else.

Crowd meter
There is no describing the Wankhede crowd in a few lines, that will take a book! The upper tier of the North and SRT Stands, where I was seated, was probably the most vibrant stands with the constant cheering. Even the English supporters joined in the celebrations and overall it was a cordial atmosphere with a healthy dose of bantering between the Indians and English. One of the English supports sitting with us went on to say that it was the best place to watch cricket in India!
Overall
It was disappointing, it was heart-breaking, it was frustrating as an Indian fan, but overall it was a brilliant day of Test cricket. It started with centuries by Cook and Pietersen, it went on to become a wicket-taking competition with 8 English and 7 Indian batsmen getting dismissed. So we got to see the best of both batting and bowling.  Mumbai has always given us some of the most interesting Test matches in the recent years and I am hoping that one too, miraculously, becomes a close contest.

Marks out of 10
9. The one mark lost is due to the uninspiring performance from the Indian team. Gautam Gambhir has played a crucial knock so far, but otherwise it has been a collectively disappointing outing. But full marks to the atmosphere created by the fans despite the disappointment.
Posted by ZENIA at 00:26 2 comments:

ENGLAND NEED TOO MANY COOKS…

ENGLAND NEED TOO MANY COOKS… 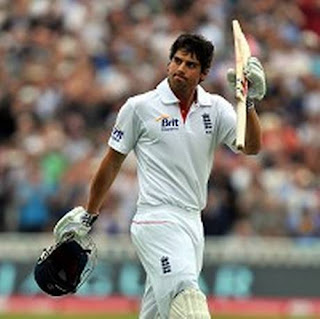 This was the first Test of his first series as official captain. It could not have come at a more inopportune time. The team has lost its No. 1 Ranking, worse, they have lost their captain, the guy who got them to the top. Their most prolific batsman has been ‘re-integrated’ in the team and the dressing room atmosphere is less than cordial. They have come to India, a place with almost hostile conditions, for a series that is hyped up to be an almost Imperialist revenge like plot. In the midst of this, he is just a left-handed opening batsman who has to play for the first time without his trusted new-ball partner in less than favorable conditions, while forging a new partnership with a debutant, while keeping up with a headstrong Coach, while leading a stumbling team in a crucially difficult series.

All this sounds like a perfect recipe for disaster. But not if you are Alastair Cook.

England lost the first at Ahmadabad by 9 wickets, a result much better that expected. And all thanks to that rookie captain playing for the first time without the guidance of mentor Andrew Strauss. But Cook has no reason to be disheartened by his team’s loss. Because there was a huge win in there for him. Scoring a fighting century, a 374-ball 176 no less while your team is following on after getting out for 191 in the first innings, is the mark of not only a good batsman, but of a great cricketer. That right there is the biggest positive England can take from the loss.

T o be perfectly honest, England does not look half as the team that tormented India last summer, whitewashed them 4-0 and took over the Test mace. Over the last 12 months, a lot has changed for the England Test team, even though most of their frontline players remain the same. Although it is agreed that the situation is different as this series is being played in the sub-continent and not on the bouncy green tops back home. But then they played South Africa in the very same conditions and lost 2-0 in what was one of the most intense Test battles of 2012. England played West Indies at home before that and did just fine with a 2-0 victory. Of course I consider their 1-1 draw in Sri lanka as a plus in England’s favor because winning a Test match there takes great effort, for batsmen who are susceptible to spin on rank turners. (It must be said that major credit here goes to a certain Mr. Pietersen whose splendid century lit up the series & possibly saved it) But the pivotal point where England started losing the plot came as early as January, a time when they were still No. 1. England’s UAE tour, the Test bit of it, was disaster to say the least. Pakistan won the 3 match series 3-0, completely humiliating the visitors.

Cut to November, and after one Test down in the series, the challenges still remain the same for the Barmy Army. Kevin Pietresen can proclaimhis loathing for losses all he wants, truth is that they have a lot of ground to cover before the next Test in Mumbai starts. It is not about the English batsmen’s affinity (or rather the lack of it) for spin, it is not about the mental games of playing no spinners in the tour games, it is not about India preparing bone-dry, spinning pitches. If Cook and Matt Prior could have batted it out following on, there is no reason why the others couldn’t.  As the captain said post match, English batsmen failed because they did not trust their own methods. If England has to turn a new leaf, then it is the batting that will have to come out strongly, start using their feet, try not to come ahead and sweep every ball that spins. And they have an excellent example of the same in the form of Captain Cook.

He did not get the Man of the Match award, there was a Double Centurion from the opposite side who deserved it. But what he did get was respect, a lot of it. Alastair Cook’s gritty century won him a number of admirers, most of them Indian, and rightly so. He has set the tone for the series, one which if the rest of the team follows, it will be the perfectly intense competitionwe have been waiting for. It is always said that too many cooks spoil the broth, but in this case, I think England needs too many Cooks!
Posted by ZENIA at 20:50 1 comment: