363 days.
In exactly 363 days, on the 27th of July 2012, the most spectacular sporting spectacle in the world will begin in the capital of England, London.
Olympic Games 2012.
The Olympics are the most anticipated and the most celebrated sporting event in the world. It is the one stage that all sportsperson wants to perform their best and the one victory for which athletes are ready to give in everything. Since 1896 when the first Modern Olympic Games were held at Athens, it has been a constant feature every four years where all the top athletes from over 200 countries in the world meet at a different location in the world. For over a hundred years the Games have been going strong as a symbol of sportsmanship, excellence and resilience. The games have carried on in face of adversity, from Nazism during Berlin 1936 to terrorism in Munich 1972.The only times there has been a break in tradition is during the two World Wars.
With less than a year to go now for the 2012 edition of the Games to begin at London, UK, there has been a quite a lot of buzz about what to expect at the games. This is the third time that the English capital is hosting the Olympics and the authorities have promised to make these Games the most stunning of the all. With swanky new venues which include an artificial beach and a plethora of modern amenities for both participants and spectators, London has outdone itself so far with the arrangements preceding the Games. But as an Indian sports fan, my interest in the upcoming Olympic Games lies mostly in India’s performance. And I’m ready to go out on a limb and say that London 2012 is going to be the best Olympic Games for India in terms of medal tally.
India has never really set the Olympic stage on fire with its performance despite having some very talented athletes. Except for in our national game Hockey, in which the Indian team won 11 Medals, eight being Gold of which six were back to back from 1928–1956, Indian athletes have not made an impact on the biggest stage. India has won a total of 20 Olympic Medals. Our first individual Olympic medal came in the 1952 Helsinki Olympics where Khashaba Dadasaheb Jadhav won a bronze in Men's freestyle bantamweight wrestling. After that, our next individual medal came much later in 1996 at Atlanta when Leander Paes won another bronze in Men’s Singles tennis.
So what makes me so confident that India is going to give its best performance in 2012? If we look at India’s Olympic medal tally after Paes won only the second individual medal in 1996, India has progressed by leap and bounds. In the 2000 Sydney Olympics weightlifter Karnam Malleshwari won a bronze medal in the Women's 69 kg competition. In the following Olympics at Athens in 2004, India won its first ever silver medal. Col. Rajyavardhan Singh Rathore was the man who raised the bar for India by coming second in the Men’s Double Trap shooting event. But India’s best year at the Olympic Games came in 2008 at the Beijing Games when we won three medals one of which was Gold! Abhinav Bindra became the first ever Indian athlete to win an individual Olympic Gold Medal when he hit the bull’s eye in the Men’s 10m Rifle shooting event. This was followed by a bronze in Men’s 66 kg freestyle wrestling by Sushil Kumar. Then pugilist Vijender Singh won a bronze medal in the Men’s 75 kg Boxing event. India, for the first time had won more than one medal at a single Olympic Games. It was indeed a proud moment for the entire country.
Considering India’s progress report over the past 3 Olympics, there is a very good chance that we will further improve at the 2012 Games. From Bronze to Silver to Gold, from one to three medals in one year, the Olympic Graph has shown a definite rise. And like every Indian, I am highly optimistic about our chances. Hopefully I will be proven right in a year’s time.
Posted by ZENIA at 05:16 3 comments: 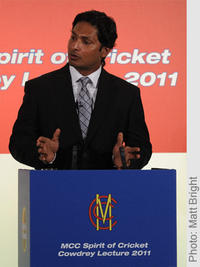 Most cricketers are known for their cover drives, their hook shots, their googlies, their beamers or their eccentricities. Very few cricketers are known for their oratory skills. The only time we can hear them talk their heart out is at press conferences, interviews, post-match ceremonies and in some rare cases, the stump microphone. Kumar Sangakkara has been heard by everyone on all the above mentioned occasions. His gift of gab has always been as popular as the video of him sledging Shaun Pollock at the World Cup match in 2003. It has always been a known fact that Kumar has a way with words that few other cricketers have, be it his gracious talk after losing the World Cup in 2011 or his sledging ability. But what the cricketing world did not know was the power, the conviction and the effect his words would have. Had the MCC known it, they would have offered him the annual MMC Spirit of Cricket Lecture long before.
On the 4th of July 20011 former Sri Lankan captain Kumar Chokshanada Sangakkara addressed a packed Lords Stadium to deliver the Cowdery Lecture. In doing so he became the only Sri Lankan, the youngest and the only active cricketer to be given this honor. As he stood on the podium to begin his speech, little did he anticipate the fierce and wide spread reaction his words in the next hour were going to have. From the starting greetings to the culmination, the audience hung on with bated breath and as he finished, he received a standing ovation, the only speaker to receive it after Arch Bishop Desmond Tutu. Kumar Sangakkara had just delivered the most important speech in recent cricketing history.
The topic that he had chosen was something half the world was probably unaware of – “The story of Sri Lankan cricket.” A small South Asian island country in the India Ocean, it has always been in the global consciousness for its 30-year long civil war, its violent race riots and the one of the most dreaded terrorist groups The LTTE. Very few people in the world know anything about Sri Lanka apart from its violence and political turbulence. Those of us belonging to cricket playing countries have at least heard of Sri Lankan names beside V Prabhakaran and Mahinda Rajapakse, we know who Arjuna Ranatunga is, we know the contribution of Muttiah Muralitharan to cricket and we know that there is more to Sri Lanka than just ethnic conflict. Sangakkara strived to do just that, to highlight what Sri Lanka as a country is apart from its blooded history and political anarchy. His speech was more than just an address made in a cricket club, it was form of rebellion against the prevalent anarchy and corruption and a plea to resolve all conflict and restore the nation to its former pride.
Politics aside, Sri Lankan cricket has been plagued with a number of problems recently. From the terrorist attacks on the cricket team in Pakistan on March 3rd 2009, the claims of match fixing by former captain Hashan Thillakratne, the rampant corruption and the political interference which led to Sangakkara’s resignation from captaincy. Kumar in his speech touched upon all these issues and laid down the harsh facts without second thought. He spelled out exactly what was wrong with the cricket administration in his country, what was the reason for the corruption and what were going to be the consequences of it. He explained the important role played by cricket in rebuilding the war-torn country and why it was crucial that cricket was kept away from political or selfish motivations. Fearlessly he attacked the cricket Board and its greed for money, their elitist attitude and its politics. He expressed his concern that all this behind the scenes shenanigans were going to ruin cricket in his country and thereby ruin the pride and glory they derive from it. His sole aim was to protect cricket, which in his country occupied a place of pride as a “panacea that heals all wounds.”
Judging by the buzz this speech has created and the negative responses from ministers and politicians in Sri Lanka, Sangakkara has hit the mark with his words. He has brought to light all the overt operations which threatened to tarnish the game he holds beloved and has taken a stand against the forces of power back home. It takes great courage to go against the organization that employs you to bring out the truth and now that he has gone all out, he will have to face the music. But I am sure he takes hearty from the fact that the 20 million people that he referred to in his speech as the fans who form his foundation are standing behind him. The media, the social leaders and the ordinary citizens have all appreciated his courage and have come out in full support of him. Newspapers like The Island have carried strong editorials condemning the political interface in cricket, eminent cricket writers like Peter Roebuck have labeled his speech as a turning point in cricket history and fans have used social media to express their solidarity with Sangakkara. In a situation like this the entire island nation has chosen to stand behind their sporting hero and with this Sangakkara has achieved the aim with which he delivered his speech. What remains to be seen is how far reaching the after effects of his speech are and how much change can it bring about in cricket administration. But one thing is for sure, Kumar Sangakkara’s speech was no ordinary lecture. It was more than just a speech, it was a wakeup call for the cricketing world.
Posted by ZENIA at 04:42 5 comments:

I normally would never post someone else's writing, but I just wanted to post Kumar Sangakkara's speech because I thought it was a brilliant piece of writing. 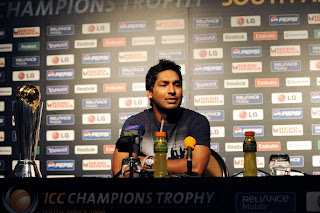